Day #7-8: The Overnight Train from Krakow to Prague

My last night in Krakow was #great. I saw a beautiful church, had pierogi for dinner, met two women from Georgia, and turned upwards with the squad. When 10 o'clock rolled around, it was time to take the bus to the train to Prague. Sitting on the platform, I really had no idea what to expect, just like the Regina Pats, at the beginning of the season. But after we got on the train, my previous worries vanished quicker than Toronto during the playoffs.

The train conductor was a pretty nice guy, but his English, though better than my Polish, was difficult to understand at times. He needed someone to explain how the locks on the doors worked, and Ms Freeman, seeing my obvious potential, chose me to do this job. He explained, to me, how all three locks worked and then told me to teach the other 5 cabins, on my car, how to do the same. He then told me to go to his "kingdom, behind the wooden door, at the front of the train car", if I had any questions. I then slipped into my walrus-themed pajamas and headed off to teach the boys and girls how to use the locks.

Afterwards, it was time for bed, I grabbed my toothbrush, toothpaste, and a bottle of waßer, as the Germans would say, and danced around the hall, while ridding my teeth of plaque. After brushing my teeth, I went into my little shelf of a bunk bed, took a survey about overnight trains for an institute in Prague, delivered it to the conductor's monarchical palace at the front of the train car, and then slid into my shelf of a bed. I hadn't slept on a bunk bed since Cub Scouts, but for some reason, I slept like a rock.

At quarter of 7, our train car's almighty leader knocked on the door, and at 7:30, we arrived in Prague. We got out of the train station, crossed the street, and arrived at our hotel. We then headed to the Bankomat, as the Czechs and Poles would say, picked up thousands of Koruns, and hit the town. (Bill "The Amateur Train Conductor" H.)
Posted by BLS Facing History trip to Eastern Europe 2014 at 6:34 PM No comments:

I am typing this on the long plane ride home, trying hard to stay awake so I can get back on Boston time.
I have been lucky enough to travel to cool places in my life but I know that I could never have created this trip on my own. I never would have known how to go about planning something like this, never would have had the connections to make it happen, never would have been able to force myself to pack so many things into twelve short days. And so I am forever grateful that I got to be a part of this.
I only knew a handful of people well before this trip and yet at midnight on my eighteenth birthday in Berlin a whole group of people burst into my room singing. And that was just the nature of this trip. I can't count the number of times I've been given back massages, or lent money, or asked how I'm doing/how I slept/how my food tastes. People truly come together when we're taken out of our usual environment and when BLS feels far away and irrelevant.
It was interesting to be on a trip that essentially looks at the worst of human behavior, the lowest most irrational things we have done to each other... And to be surrounded by so much goodness, generosity, and laughter.
Okay, time to go back to filling out the very long evaluation of this trip. You didn't think Ms. Freeman would let us relax on the plane ride home. ;) just kidding. A big shout out to Ms. Freeman for pulling off this miracle of a trip once again...it's changed a lot of lives and will always be very special to me. Thank you.
Thanks everyone at home for reading and for supporting us. Xoxo.
Sean is next to me and he has yet to write a SINGLE blog post. He says I'm putting him on blast. Whoops. Okay he would like to say something (hallelujah) (check my pulse) (must be dreaming)  (Nora Col)
* * * * * * * *
Hi. It's Sean
That's a lot of talk for such a small person, Cora Nollins.
I think my biggest take away from this trip has to be the friendships and the bonds we have all made. With every sad moment, we all managed to listen. Everyone was inclusive during the fun times. Everyone massaged each other on the 4 hour bus rides.  I met some of the best people I know. I spent most of my time with people with whom I hadn't really talked to before this trip.
Aside from learning about the absolute horrors of WWII, we learned quite a bit about culture and life in other countries, and since this was my first time out of the country, it was great to be with a group of people who were experiencing it at the same time.
I want to thank Ms Freeman for the opportunity and organization of this trip. I know it was both tiring and stressful, and I can't imagine anyone else being able to do the things you do on this trip.
A very interesting part of the trip for me was visiting synagogues and cathedrals. Although I am not a religious person, I am very interested in the what people believe and how they worship and it was great for me to gain a better understanding.
Overall, I think I've learned more in the past 12 days than I could have ever imagined. Thanks to all my friends, old and new, for making this a great experience, and to all the chaperones for being the best chaperones and people ever!
I'm really bad at blog posts. Contrary to popular belief, i have attempted blog posts, but I also hit a awkward spot and then fall asleep on whomever I am sitting next to... (Sean C)
Posted by BLS Facing History trip to Eastern Europe 2014 at 6:29 PM No comments:

Outside BMW headquarters in Munich. 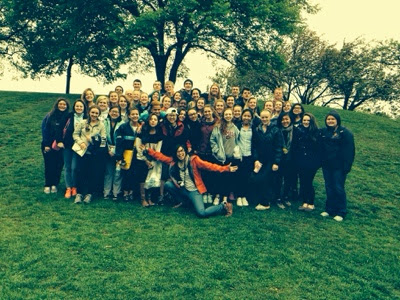 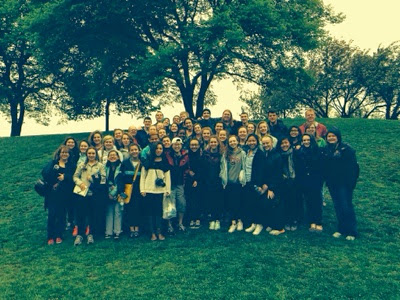 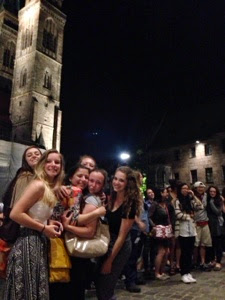 Our final evening in old town Nuremberg.
Posted by BLS Facing History trip to Eastern Europe 2014 at 3:44 AM No comments:

101 things to do when you're stuck in the hotel with a stomach bug
Actually mainly just sleep and watch billiards on EuroSport.
Majdanek
Majdanek was an extremely powerful place. When we arrived the first thing I noticed was a massive bowl shaped structure with an apparent domed roof over it. Then as we got closer We saw there was a ton of grey dirt inside. Ms Freeman told us those were the ashes found at the camp from mass burnings of people. It was truly shocking, the quantity is indescribable. Majdanek was left in much better condition than the other concentration camps we've visited so it was easier to see what it would've looked like then. One particularly disturbing part of Majdanek were the mass graves. They looked like skinny hills flanked by valleys. Walking around them was chilling. After walking through a gas chamber we all sat down on the grass and read poetry about the Holocaust aloud. It was an extremely moving thing.
We fly back tomorrow and although I'm sad to see our time end in Eastern Europe, I'm excited to see my friends and families. Love you all!! (Emily B)
Posted by BLS Facing History trip to Eastern Europe 2014 at 5:42 AM 1 comment:

A group photo, minus chaperones

Taken in front of the Plaszow monument in Krakow 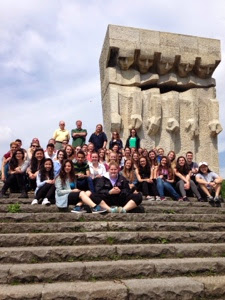 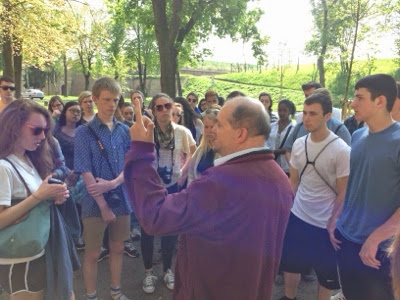 Posted by BLS Facing History trip to Eastern Europe 2014 at 8:21 PM No comments: